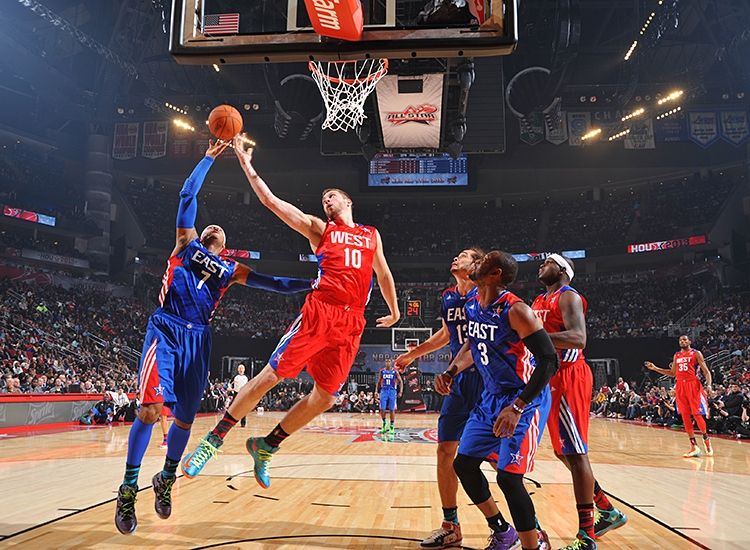 Airball: shoot baskets that misses the ring or the board.

Alley-oop: a variant of matte consisting catch the fly ball and score crushing it directly in the basket.

Hook: shooting technique used to avoid blockages, standing in profile with respect to the basket and throwing the hand furthest from the target. However, this technique is less accurate shooting.

Buzzer beater: shooting made just before the bell rings, that is, at the time indicating the end of a quarter or a game time.
Cross-over (change of hand boat): variation dribble (or pot), accompanied by a change of hand in order to move to a direct opponent.

Or lock screen when a player protects a partner of their particular opponent in an offensive phase.

Fadeaway: Basket shot made with a leap backward.

Stealing: defines the action to catch the ball towards the opponent, either directly from the hands (without fouling) or catching a bad set of this pass.

Free throw: penalty imposed when a player is a victim of a fault at the moment of launch.

Tray touching the board: designates the fact dunk without making a dunk after a double step and a jump and before the ball touches the ground ..

Steps: misconduct when a player with the ball gives more than two steps without dribbling.

Restricted area: the floor area beneath each of the baskets. This area has a different shape depending on the agencies that organize competitions.

Rebound: Action to capture the ball after a missed shot and before it touches the ground.

Mate or Slam dunk: dunk also called, is an action game that involves hanging hoop frame, with one or two hands. Mate is one of the most spectacular ways to score. In other sports (tennis, volleyball …) talking about smash or auction for a similar type of action to dunk.

Clean basket: a direct shot at the ball enters the basket without touching the rim or the board.